Isolated spot
Eight hours flying time from the Indonesian capital, the Central Highlands in Indonesia's Papua province are among the least visited places in the world. Life here bears little relation to the chaos of Jakarta's skyscrapers and toll roads. In villages like this, there are usually no permanent roads, no electricity and no phones. Foreign journalists need a permit to travel here. Getting information into - and out of - areas like this has not been easy.

Radio contact
But information should flow more easily into the Central Highlands now. People are gathering here from across the area to celebrate the opening of an independent radio station. Officials say it is the first one to be built in such a remote region. It will be linked to the independent radio news agency KBR68H, and will be staffed by local people - all of whom have been trained from scratch.

Gaining trust
There was a lot of scepticism at first about the benefits of building the station. Promises of development have often gone unfulfilled here and many local people are angry at what they see as neglect from the central government in Jakarta. Papua generates large amounts of money thanks to its vast natural resources, but the region remains desperately under-developed.
The editor of KBR68H, who spearheaded the project, says it took many meetings before locals began to trust in it.

Electricity supply
One of the key problems in building the station was the lack of power. This is an area where most people live in traditional thatch huts, and rely on wood fires to keep warm and cook food. The team behind the project decided the only solution was to build a mini-hydro-electric dam to power the station. There was enough electricity left over to channel some to the school, the church and the more modern houses of several local leaders.

Changing dress
Several people wear traditional dress here, but others - especially children - wear Western-style T-shirts. One man, dressed in a traditional penis gourd, head-dress and beads, told me he was tired of sleeping on the ground in his hut and wanted a modern house and proper roads.
"When that happens," he said, "I'll change the clothes I wear and wear T-shirts instead."

Pig economy
This is an area so cut off and under-developed that there is neither much money nor much day-to-day value in having it. Most people are subsistence farmers and the community is built on a pig economy. For the opening of the radio station, locals celebrated with a traditional pig roast.
Nine pigs were brought to the party, by tribal leaders, local officials and neighbouring villages. One pig can be worth the equivalent of $2,000 (£988).

Outside world
Without phone connections or frequent visits from outsiders, getting information from areas like this used to be slow and difficult. Now rights workers say the radio station will make it easier to connect with the outside world - to share allegations of abuses, develop the local economy and stay in touch with events outside of Papua. People may have been isolated for generations, but many are keen to know what is happening in Jakarta and beyond.

This link is sponsored by GDI Online Marketing. 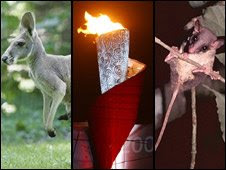 It's the end of the year... How much can you remember about what's been happening in Asia and the Pacific in 2008? Here's your chance to find out!

When you've got your result, why not e-mail the quiz to your friends to see how they measure up?