How to make money from your blog? 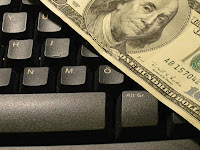 Want to monetize your site, but seems to take forever to reach the minimum payout of $100 using Google Adsense? Check out these Pay-Per-Click (*PPC) and Cost-Per-Mile (**CPM) advert program.

*Pay-Per-Click is programs such as Google Adsense. You get paid whenever someone clicks on the ads that you have placed. This is probably the most popular one. Payment given can vary depending on the niche of the website and of the publisher you are using.

No-Minimum Cashouts,
Paid CPM - A Easy safe CPM Banner that pays $0.01 per CPM. No Minimum cashout. Payments made by E-gold or Moneybookers at end of Every Month. Net 45 Days.

Paid-to-Promote- A CPM Banner. Get Paid $0.005 Per Unique View. 2 Monthly Payments. No Minimum Payouts. Unique Views Count Only if redirected. Great if you need fast cash.

Mvav - A great fast paying CPM Banner Program. They Pay $0.01 Per 2 redirects. Redirects occur only when someone is using IE. No minimum cashout. Payments made by Paypal.

Obeus- A Paid to click Program That has CPM but you can only get CPM is a advertiser buys directly from you. Cashout is $1.00. They are very strict with click fraud. If you happen to click your own ads you will be suspended upon payout. Payments are sent within 48hours and by E-gold.

$1.00 Min. Cashouts
Itsptp - Another well known CPM Banner Program. Its also known to have some background music so if you have a music player its not best to add into your site. You get Paid $1.5 CPM for Canada, United Kingdom, United States, Australia, Austria, Belgium, Denmark, Finland, France, Germany, Greece, Iceland, Italy, Netherlands, New Zealand, Norway, Portugal, Spain, Sweden, and Switzerland Traffic. Easy $1.00 Payout. They Pay by E-gold or Paypal.

$10.00 Min. Cashouts
Bidvertiser - A well Known Paying PPC Program. A alternative for Google Adsense. It pays Well if you have lots of clicks. Remember Do not click your own ads. They Will know and suspend your account. They track Ip and a ratio of CTR%. They Pay Net 15. Minimum Cashout is $10.00. They Pay by Paypal or Check.

Adbrite - Great CPM and PPC Program. This is a great alternative for Google Adsense. Low $10.00 Payout. Paid By Check. Net 30.

VastGate- A CPM Banner Around for over 2 Years. Many Use it. Not many Reach Payout Due to the $25.00 Min. Payout. It pays $0.25 CPM. It contains a Layer-Ad inside the banner. Monthly Payments made E-gold or Paypal.

Adlandpro - a long term Paid to Search and Paid to Click Program. Minimum Payout is $35.00. They Send Payments every 15th of the Month. Payments are sent by check.

Cpxinteractive- A Well Known CPM Banner Program. They Rarely Accept Members unless the site has over 500,000 traffic monthly page views and follows their site content catagory. If you happen to get accepted by them you will be very lucky. They pay really well. Net 30 days. Cashout is at $50.00. Payments are made by Checks.

Gimmelink - A Brand New CPM/PPC banner Program that pays $0.20 per thousand raw views. Easy money maker. Not sure if it pays yet will update when payment is made. $50.00 Cashout. Payments made by paypal,check,e-gold,safepay,alertpay.

AdultAdWorld - best Well Known Paying Adult CPM Site. They also carry Non-adult CPM Banners. There CPM Pays at this rate. All CPM Banner = $0.05 CPM Raw, All Pop-under/Pop-ups = $5.00 CPM Raw, All Click Thrus Banners $0.05 per click. Minimum cash out is $50.00. They Pay Every Month Net 30. Payments Made By Check. (CAUTION: I don't think you can put this in a blogger account since it does not allow adult content)

Payperwindows - A new type of CPM Program. They pay $1.00 CPM and cashout is $50.00. Weekly payments made. Payments made with Paypal.

Shopzilla- a great PPC Program That pays for Genuine views which means that people who click the ad must surf through the ad and also click a item in order to count as a click. Each Valid Click Generates at least $0.20-$10.00. They Pay By Check. Minimum Cashout at $50.00. Net 30 Days at the end of month.

Tribalfusion - A Well Known Cpm Program. They Accept Almost everyone that has at least over 2000 unique traffic daily. Must also comply to their website terms. Cashout is at $50.00. Payments made by checks. Net 45.

Interserve - A New Paid Per Click Publisher Program. Started On August 2007. Minimum Cashout is $50.00. Each Click = $0.01-$5.00. Very Much Like Google but just a little less. Payments sent Every 28th of the month by E-gold,Check,Bank transfer, and Moneybookers.

These are the not those "sweet young things" that you might be hunting for! 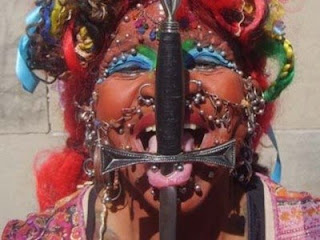 Wonder what is going in the mind of these girls? Self-esteem issues? 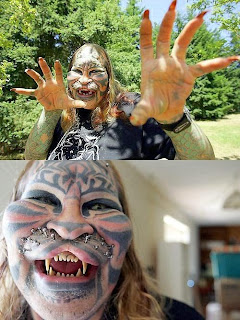 Why disfigure themselves, destroy the beautiful faces they were born with? 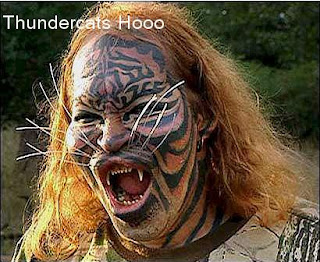 It is because of the childhood, fantasies, personal choice or fashiong statement?

February 2006--James Sooy has developed a new pair of eyeglasses that mounts into the bridge of your nose, via piercing. Dubbed, "Pierced Glasses", they offer people who are already cool about body piercings with a practical use for their love of body art. He's working on bringing it to the consumer market. Read an interview with Sooy. You think pierced glasses are are too extreme? James perhaps summed it best...

Belive it or not: Chihuahua rescues dwarf

A 3ft 8ins woman who got lost while walking in Snowdonia was saved by her pet chihuahua.

Beverley Burkitt, 45, who has dwarfism, became lost in forest while walking with her tiny dog Pebbles, reports the Daily Telegraph.

The alarm was raised but she had not been found when night fell, so she lay on the floor and cuddled the dog to keep warm.

A search party found her the next morning and rescuers said the dog had saved her from getting hypothermia.

Mum-of-one Beverley said: "Pebbles lay across my legs overnight and kept me warm. I wasn't too worried because I knew I would be found sooner or later."

Beverley and her daughter, 15, were staying at a pony trekking centre at Dolwyddelan, North Wales, when she went missing.

She told rescuers that she strayed into woodland and then dropped her mobile phone.

A helicopter with heat-seeking cameras was launched and search parties on the ground scoured the area but it was not until the next day that she was found after her mobile phone was discovered on a path.

Asthma sufferer Beverley, of Colwyn Bay, North Wales, was found still snuggling up to the long-haired black and white chihuahua.

Chris Lloyd, of the Ogwen Valley Mountain Rescue, said: "She realised she was lost and just waited. Luckily it was quite a mild night and she had her dog to keep her warm."

Excellent Memory: The man who remembers everything! 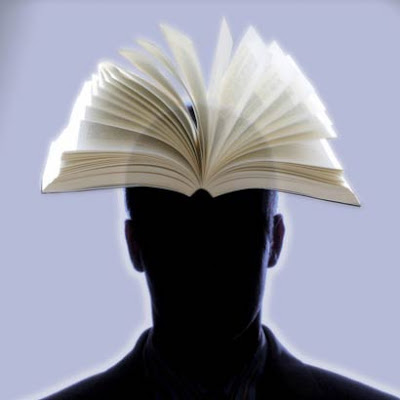 A Los Angeles man can recall almost everything he's ever done since the age of five.

TV producer Bob Petrella, 58, remembers up to half the days of his own life in shockingly vivid detail.

He was diagnosed with hyperthymestia, meaning overdeveloped memory, after putting himself forward for a study about memory at the University of California last year.

The rare condition, also known as Super Autobiographical Memory, has been discovered in just four people around the world.

Scientists are still baffled as to how and why it happens and no cases have yet been recorded in the UK.

Mr Petrella recalls the day and date he first met a good friend, and all the conversations he's had on most days throughout the last 53 years.

He first discovered his amazing talent at primary school, when he could pass every test easily without even revising.

Mr Petrella, said: "I always had this amazing memory but I never liked to advertise it or boast to strangers.

"I remember things best when they interest me, whether that's sporting events, or historical or political dates, or just good days I've had in the past."

He added: "I remember everyone's telephone number. I lost my cell phone on September 24, 2006. A lot of people would panic... But I didn't have any numbers in my cell phone because I have them stored in my head." 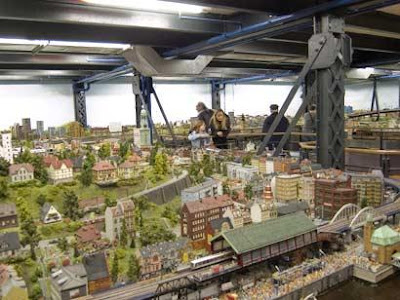 Housed in a previously empty Hamburg building, it covers 1,150 square metres and features almost six miles of track, but is still not complete.

Frederick and Gerrit Braun, 41, have spent 500,000 hours and the equivalent of more than £8million working on it.

Their creation is on display to the public and is so vast they have to employ more than 160 people just to show visitors around.

Their 'Miniatur Wunderland' is split into six regions, including America, Switzerland, Scandinavia, Germany and the Austrian Alps.

Each region boasts detailed models of some of the world's most famous landmarks.

The American section is home to giant models of the Rocky Mountains and Mount Rushmore; the Swiss section has a mini-Matterhorn; and the Scandinavian part has a 4ft long passenger ship floating in a 'fjord'.

The brothers estimate the enormous track will be completed in 2014, when it will cover more than 1,800 square metres and feature almost 13 miles of track. 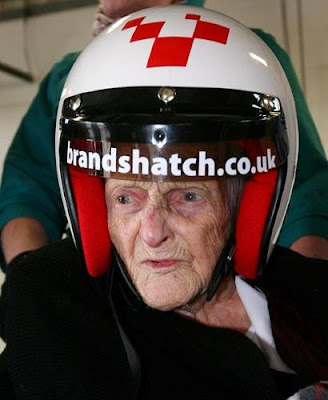 Dulcibella King-Hall notched up a top speed of 108mph in a BMW M3 to celebrate her upcoming 107th birthday.

Miss King-Hall, of Tunbridge Wells, declared: "It could have been faster", as she was helped back into her wheelchair after completing four laps as a passenger.

Asked why she loved the thrill of speed, she replied: "Why shouldn't I? Don't you like it? I like the feeling of the vehicle going vroom."

Born in Devon in 1902, Miss King-Hall has loved cars since she tested vehicles commandeered from civilian use during the Second World War.

Pulling into the pit stop after three laps, Miss King-Hall sped off for a final loop of the circuit watched by a crowd of awestruck well-wishers.

Driver, chief instructor Gary Palmer, 39, said: "I said: 'Shall we do another lap?' and she said 'yes'. It's incredible. We don't normally see people of that age on the track."

Lena Akers, social events coordinator at the Halliwell nursing home where she lives, organised a trip in a Porsche for Miss King-Hall's 100th birthday, then a drive in a Rolls-Royce when she turned 105.

She said she felt she had to "up the ante" this year, adding: "Cars are an abiding passion of Dulcibella's. Her love of speed has her constantly asking our minibus driver 'to go a little faster please'.

"If you have a lady who loves speed, I couldn't think of anywhere else better to come than Brands Hatch." 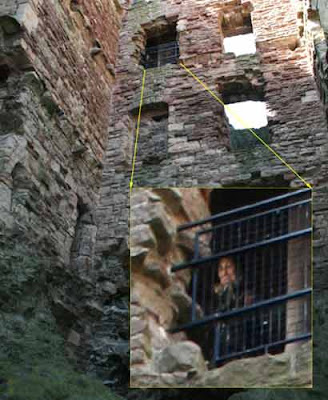 The picture, taken in May 2008, appears to show a man or woman in a ruff peering out of a barred window at Tantallon Castle.

No mannequins or costumed guides are employed at the castle, and three photographic experts have confirmed that no digital trickery was used on the photo.

Confirmed ghost sceptic Professor Richard Wiseman, who led the study, said: "It is certainly very curious. We ran it by three photographic experts and they said it hadn't been Photoshopped at all.

"The figure appears to be in period costume, but we know 100% that Tantallon Castle is not the sort of place that has dummies or costumed guides - they just don't go in for that sort of thing."

Tantallon Castle, a ruined fortress dating back to the 14th Century, stands on a remote rocky headland near North Berwick on the Scottish east coast.

Christopher Aitchison, who took the photo, said: "I was not aware of anyone, or anything, being present in my picture, only noticing the anomaly when I got home."

Psychologist Prof Wiseman, from the University of Hertfordshire, who has made many studies of the supernatural, launched the investigation a month ago.

Members of the public were asked to submit ghostly images for experts to analyse, the best of which were posted on the website www.scienceofhauntings.com.

More than 250 pictures were received and more than a quarter of a million people voted for what they considered the most convincing. The Ghost in the Castle took first place, with 39% of the vote.