Fun things to do with your money!

Fun things to do with your cash…

We saw it on a billboard yesterday, so it is hardly a surprise. Now it is official. Samsung just took the cover off its latest Galaxy Note 10.1 tablet, which features an S Pen. Unlike its 5.3" relative however, the newcomer leaves no question marks over its identity - it is now strictly a tablet.

The spec sheet of the tablet is still rather scarce. We know that it features a dual-core CPU, clocked at 1.4GHz, HSPA+ connectivity, and Android 4.0 Ice Cream Sandwich. 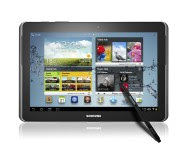 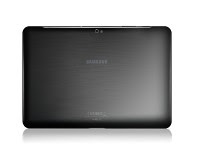 The Galaxy Note 10.1 also packs some quite interesting software tricks. One of them is multi-screen functionality. It enables you to watch videos or browse the web, while sketching out notes with the S Pen. The 10.1" screen is certainly helpful here. The aforementioned function also makes the tablet a seriously useful educational tool.

S Pen functionality has gone even further in the Samsung Galaxy Note 10.1. The slate features S Note - an app which enables you to combine notes and sketches together with web content and other digital media. The app also integrates search engines seamlessly, thus allowing you to drag and drop content without switching screens.

The Galaxy Note 10.1 will also come pre-loaded with Adobe's Photoshop Touch and Ideas apps. Both applications integrate the S Pen completely, therefore allowing you to let your creativity go wild.

We are surely going to find out more about the Samsung Galaxy Note 10.1 today, so stick around for more info on the tablet, including hands-on impressions.

Can you name the nations of the world?

Affordable and dual core wouldn't normally belong in the same sentence. In 2011. And you don't need to press fast forward. Just sit back and enjoy. There's a lot stewing in the industry's pot and we think the place smells of quad core already.

So, two affordable dual-core Android smartphones it is. The Samsung Galaxy R and the LG Optimus 2X have been duly and thoroughly reviewed but we thought a head-to-head comparison wouldn't hurt - we've certainly been asked plenty of times which one is better.

The LG Optimus 2X prides itself in being the first dual-core smartphone. The Samsung Galaxy R follows at quite some distance but runs on the same chipset - the NVIDIA Tegra 2. Both have comparable screens too: 4" of WVGA IPS LCD on the Optimus and a 4.2" WVGA SC-LCD on the Galaxy R.

What sets them apart is imaging - the Optimus 2X is in line with the current flagships with an 8MP still camera and 1080p video, while the Galaxy R stops at 5MP/720p.

Here's a quick summary of the ups and downs of the two phones in direct comparison.

The Optimus 2X has fewer wins in its column, but they're all major victories. At least on paper - we'll see if the difference holds up in our tests or if the Samsung camera can make up for the lower resolution with better detail.

There are, of course, other differences too. It's between Samsung's TouchWiz and LG's custom skin on top of Android Gingerbread. And there's the design and build quality too: both have metal inlays on the back but the Galaxy R is more than a millimeter thinner.

Other than that, the two phones are close enough in terms of specs to make this a fair and square fight. And exciting too. Let's get started with an overview of the hardware and software.

The 2X is just a tad smaller, though the actual difference in both width and height is negligible. And it's down to the screen size. The R has a 4.2" screen, while the 2X has a 4" diagonal. The relative difference is about 10% of screen real estate but the resolution is the same.

We'll have a look at the performance of the displays in more detail further on.

As far as weight goes, the two are practically impossible to tell apart - 139g vs. 135g. The thing to note is the Samsung Galaxy R weighs less despite having a larger brushed metal inlay on the back cover.

It has a slightly bigger battery than the LG Optimus 2X too - 1650mAh vs. 1500mAh - but we'll see whether that makes any difference in our battery test, since the power consumption is important too.

The loudspeaker performance is another area where those two differ. They actually ended up even on one of the three tests, but the Samsung Galaxy R was noticeably louder in the other two. Here's how they did and how that compares with other phones we've tested.

As far as software goes, both phones are currently running Android 2.3 Gingerbread with both manufacturers committed to an Ice Cream Sandwich update. LG is expected to release ICS for the Optimus 2X in Q2, while Samsung's time table is yet to be confirmed.

We won't dig into the Samsung and LG custom launchers for Android. We've found that this is a personal preference and it's something you'll have to decide on for yourself. It appears the differences between TouchWiz and LG Home are mostly aesthetic.

The LG Optimus 2X has a key advantage though - the Optimus 2X has a microHDMI port, which allows it to actually play those FullHD videos on an HDTV. There's a microHDMI cable included in the box too, so you don't have to worry about getting one. Depending on how you plan to use the phone, this might be one of the deciders.

The Galaxy R has only DLNA to rely on for connecting to TVs, but the Optimus 2X has that covered too.

One the thing that the Galaxy R has over the Optimus 2X in wired connectivity is USB On-The-Go. With it, you can hook up some external storage and and manage files on it. You'll need an OTG cable though, which isn't included in the box.

That aside, both phones have very similar software features. Both offer Flash-capable web browsers, come with Office document editors out of the box and offer social networking integration.

It's hard to pick a winner in this category. The Galaxy R is thinner and with a bigger screen, and with a slight advantage in loudspeaker performance. However, no TV-Out is a deal breaker for some. The standard microHDMI port of the Optimus 2X can save you some hassle (no MHL adapters or proprietary cables needed).

The LG Optimus 2X and the Samsung Galaxy R use LCD screens with their own proprietary technology to improve the image quality.

Slight color and contrast loss when viewed at an angle is observed in both, although the problem is less prominent in the Galaxy R.

Identical resolution and a slightly smaller screen means the Optimus 2X has an edge when it comes to sharpness. It beats the Galaxy R with a pixel density of 233ppi vs. 222ppi. It's not enough though to make a difference to the naked eye.

The LG Optimus 2X offers much better black levels - even at 100% brightness, the blacks were darker than what the Samsung Galaxy R managed at 50%. The 2X leads in contrast too, as the table below shows.

Where the Galaxy R wins out however is brightness - it's more than twice as bright. Here are the hard numbers:

In conclusion, let's say it again. The Samsung Galaxy R has a 4.2" screen, which has 10% more surface area than the 4" screen of the LG Optimus 2X. It means though that the WVGA resolution is stretched a little thin on the Galaxy R - it has a 222 ppi against 233 on the Optimus 2X. The Optimus 2X display has better blacks but the Galaxy R display is brighter and has slightly better viewing angles.